Orinsay originates from the Norse for 'ebb-flow island'. It is not known when it was first settled but it is a very pleasant, sheltered spot with arable land and good fishing.

Mary Maciver, who rented the land, wrote that the 'place is considerably infested with ravens' which were interfering with the tenants' fish and barley and in 1830 the township was described by Rev John Mackintosh as 'very destitute', though not as bad as Kershader. 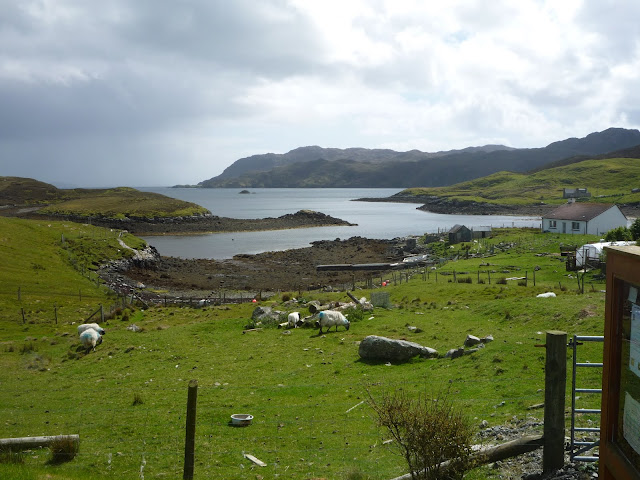 View from the head of Loch Shell - the Shiant Islands can (just) be made-out in the distance
One of the people eking-out a living there was Duncan Macdonald (1750 -1830), a Kelp-Worker of 6 Old Orinsay. One of his children, Alexander Macdonald (c1786-c1845) had married Annabella Barbara Mackenzie (1797-1881) from Cro Mor, Lochs.

Two years later, there wasn't a soul left in Orinsay, not a roofed-building to be seen and the only inhabitants were the sheep being grazed to fatten the purse of the landowner at the expense of the livelihoods of the people. An earlier attempt had been made, in 1842, to clear the township but it was in 1843 that the men, women and children of Orinsay were scattered throughout Lewis.

‘their fires were drowned on the hearths by officers of the Estate’
(Donald Mackenzie 1817-1892, a 27 year old member of one of the families evicted from Orinsay)

Orinsay - A Day of Sorrows by Donald Mackenzie, Domhnall Dubh
My grandfather, Domhnall Ban, was only four years' old when the evictions from Orinsay took place in 1843. He remembered walking with his mother to Garyvard early on a summer's morning where boats were waiting to ferry them over Loch Erisort to Keose. On landing at Keose, they had to walk over the moor to Crossbost where poor, infertile, rocky land had been set aside to form 27 crofts. The women and children made this journey while the young, able-bodied men and women walked all the way round the end of the loch with the livestock and drove them to their new grazings on the northern shores of Loch Erisort.


The men who were left behind stripped the rafters and beams off the old homes and together, with any belongings they had, were loaded on to boats and sailed out of Loch Shell, around the coast to Crossbost. My great-grandfather was one of six brothers cleared from Orinsay that day.


My grandfather was born in 1839 on the croft at 6 Orinsay. Tradition tells us that there was a white house built on that land at a place called "Rudha Mhic Eoin".

The Macdonald family ended-up at 4 Stenis, near Stornoway and it was there that one of the daughters, Mary Macdonald (1821-1908) met and married a seafaring widower from Harris.

They were my Grandfather's grandparents.

Anyone wanting to research the history of Lochs, or with an interest in the culture of Lewis, will find these sites invaluable: