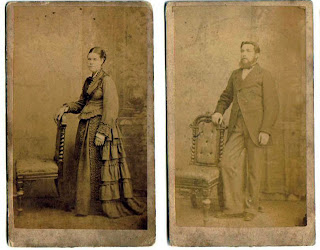 Originally from Cro Mor, Lochs, the MacArthur family of the retired Fisherman Donald and his wife Mary (MacLeod), are all living at the home of their son, Alexander, who is a General Merchant in Stornoway.

This, briefly, is his story:

Born in Cro Mor in 1854, Alexander was the eldest of four children.

In 1861, Alexander, his sister Peggy and their parents were living in Cro Mor but a decade later he had left to seek his fortune in Stornoway and Malcolm, aged 3, and 6-month old Annabella had completed the family who were now in Entresgein(sp?) in Stornoway.

The teenager Alexander began his merchandising career in as an Apprentice Shopkeeper to Hector Ross of 47 Cromwell Street (now the Bank of Scotland) where he was part of the household in 1871.

Tragedy struck on the 4th October 1872 when 2 year-old Annabella succumbed to a 3-month illness.
Alexander, who spoke and wrote English, was the informant.

A decade later, 27 year-old Alexander and his wife Isabella had established themselves in 9 Lewis Street with his retired parents and his 12 year-old brother Malcolm.

By 1891, the family, including 5 children, have moved to 64 Lewis Street along with Alexander's brother Malcolm and the Donalds Maclean & Mciver, all 3 of whom are Salesman. A General domestic Servant, Christina Macleod, completes the household.

The new Century finds Alexander's family, including 8 of their children, still residing at 64 Lewis Street along with his now tailoring brother Malcolm, Domestic Servant Christina and a 'Nurse Domestic'.

Alexander MacArthur, General Merchant, died on the 14th July 1912 at 48 Lewis Street, Stornoway. He was 56 years old. The cause was Disseminated Sclerosis, which we know today by the more frequently used term Multiple Sclerosis.

He was thus spared what befell his youngest son 4 years later: