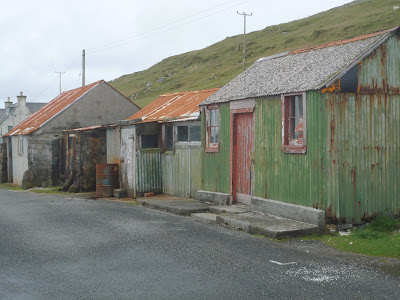 Strond Post Office (Far Right) on 23th May 2009
An image from 1996/7 can be seen here: http://www.scotland-inverness.co.uk/lburgh.htm
A list of those providing postal services to the population of Harris (with additional dates of significance):

1855 - Construction of the road from Stornoway to Harris, through the parish of lochs, began in 1830. It was eventually completed in 1854, and though it was a road only in the vaguest sense of the word it was sufficient for the GPO to contemplate an expansion in the postal services.
It was proposed to run a foot-post from Stornoway to Tarbert twice weekly in summer and once weekly in winter, at a cost of thirteen shillings a week. Two runners were employed on this service: one messenger took the mail as far as Balallan and the other carried it from there to Tarbert. This service came into operation on 29th March 1855.

I think there are several significant feature here.

The appearance in 1891 of the Postmistress in Obb suggests that prior to this it may well have been the case that whatever postal services were available were integrated into suitable pre-existing businesses in Obb.

Tarbert's absence from these records after 1841,when is had a Postmaster, until 189, is at first sight slightly more surprising because if anywhere would have been expected to have shown the development of postal functions then surely Tarbert would have been it?

It is not until the start of the 20th Century that we see evidence of a system of postal functions covering the mainland of Harris and the outliers of Bernera and Scalpay too.

The role of Letter Carrier or Post Runner was often undertaken as an additional, secondary one and my relative's appearance in the records is perhaps the exception that proves this particular 'rule'?

Roderick Kerr, Postrunner, died at home in Strond aged 56 on the 3rd January 1891 of Chronic Bronchitis.
Posted by direcleit at 22:11