An Old Photograph From Stornoway 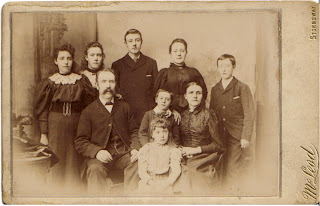 This family portrait was taken by Mcleod's of Stornoway.

The youngest two, Johanna and Donald, were born in 1887 and 1889 respectively. I think this dates the photo to circa 1897, a couple of years before Norman's early death in Glasgow.

My interest in the photograph is that Norman Montgomery was my grandfather's father.

Norman married Marion Maciver on the 30th June 1875, my grandfather John Kerr having been born less than four months earlier on the 5th March 1875.

On the 13th July of that year, the Sheriff's Court in Stornoway ruled that Norman's name be added to the records as the illegitimate John's father.

His mother, Annie Kerr, a dressmaker, went on to have seven more children after marrying her cousin William Maciver, a baker, on the 21st April 1881.

They left 6 year-old John to be raised by his grandparents which was not unusual in cases where births out of wedlock were being concealed but seems somewhat strange given Annie's pursing of Norman in the courts?

Note: Until a few years ago I knew nothing about my grandfather other than his name and that he was born in Stornoway. It was a phone call from an historian in Edinburgh in 2006 that informed me of his father's details. As a result of that information, and a bit of 'Googling', I came upon someone seeking information on a Norman Montgomery of Stornoway. I composed a rather delicate email to this fellow descendant who was totally unaware of Norman's first venture into fatherhood. Three years ago we met at her home on Skye and a couple of days later her brother gave me a whistle-stop tour of Lewis. Annie & Norman were united again...
Posted by direcleit at 15:24