Arriving at the Berneray Hostel, another Gatliff Trust property, I was astounded to find just how precisely 'on the beach' it is – the bunkroom I chose was a narrow path away from the boulder-strewn little cliff that was washed twice-daily by the Sound of Harris sea. 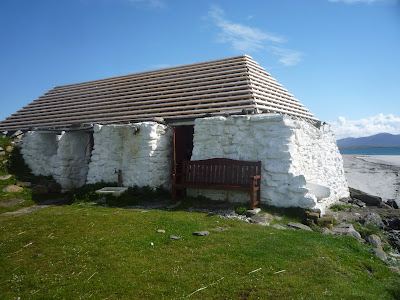 Even at 10 in the morning, you could tell that it was going to be a beautiful day so I set-off immediately to explore the jewel that is perched at the very tip of the southern archipelago. I walked the three sides of the almost square Loch a Shaigh, pausing only twice: once, to read the information plaque about Grey and Common Seals and the second time to pop into the Post Office to see if the elusive bus timetables had appeared but, alas, they were still anxiously awaited.

Continuing along the rectangular way, I noticed a series of rock-lined inlets which are the clear remains of moorings and possibly, boat houses. 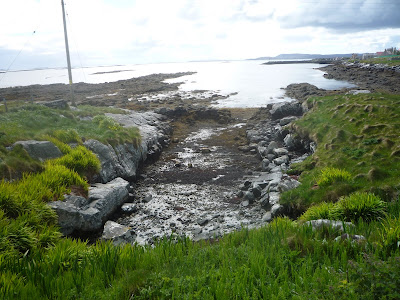 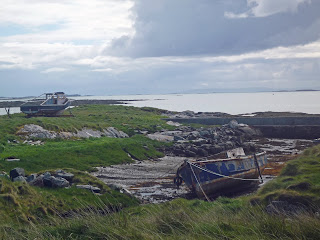 A little further on is a larger such inlet, more of a mini-marina, and as I was taking a few snaps three people hove into view, into my field of view, the image I was attempting to capture. The male was carrying the largest-lensed camera imaginable whilst the two females each lugged a three-legged monstrosity. The impression was of a hunter and his two Sherpas. I later met them in the cafe and it transpired that they were on a landscape photography course based in Harris and had been sent to Berneray with a list of locations to shoot.

There is an Historical Centre and Internet Access Building here but unfortunately it doesn't open until June ,although given the number of visitors already this season I expect that may be extended?

'The Lobster Pot' cafe and shop gave me the chance to have a coffee and garner my thoughts for the rest of the day. It also provided me with my first 1:50,000 OS map of my travels, a sheet which very usefully covers North Uist, Berneray and the most southerly part of Harris. I decided to retrace my steps a little and walk to the long beach on the west coast. 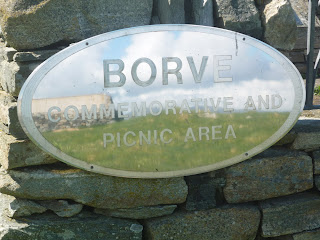 Turning left towards Borve, the road rises a little before sweeping down to the broad swathe of machair starting at the Community Centre. In front of this large, modern facility, is a lovely walled commemorative space with three plaques naming past Borveans in English as well as Gaelic. From this roll, I learnt that the Gaelic for Peter is Padruig, not Padraig as I had previously thought.

Passing through the gate and proceeding on the road that winds itself across the fertile fields to the dunes, I was frequently under fire from the lapwings defending their nests. They would do so with a display of aerobatic agility that was as impressive aurally as it was visually. The calls and cries accompanying each manoeuvre and ,in particular, the sound of the air whooshing past their wingtips when, having made a hight speed run straight towards me they would peel-off at the the last moment with a final warning cry , was a dramatic delight. 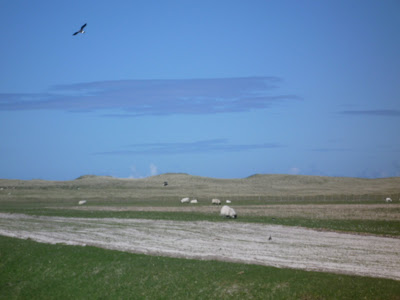 The ewe's, with their 'bonny' bouncing babes, were similarly wary of my presence but strangely unconcerned by the far greater danger posed by the occasional car the passed on it's way to or from the dune-side car park. The lambs looked extremely healthy, fed on the lush machair grass in this peaceful (lapwings notwithstanding) plain. Upon reaching the car park with it's line of picnic benches, I rested awhile before setting off through the path through the dunes towards the beach.

The sun was high in the blue and suddenly a deeper blue came into sight as the Atlantic arose before me. I stopped, breathless, not from the walk but from the serene beauty of the beach, the sea and the islands beyond. Shell-shard sand glistened at my feet, the fragmented facets of the crushed crustacean carapaces reflecting the rays of light into a myriad sparkling flashes. 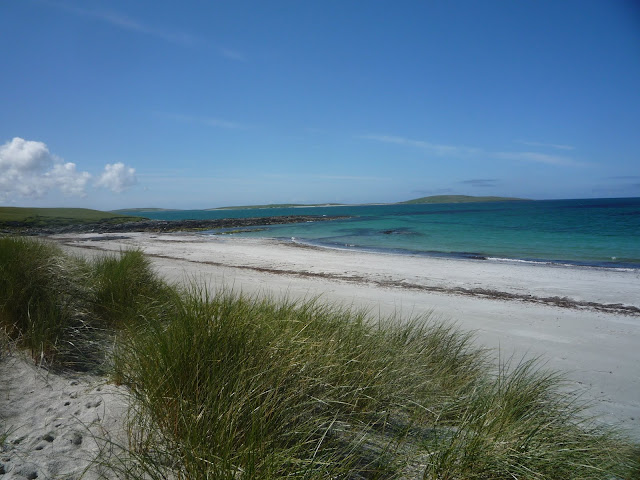 Pockets of seaweed sat glistening on the sand, razor-shells punctuating the spaces between, and the water bubbled benignly as it slowly retreated back towards Canadian shores.
Heaven on Earth.
Posted by direcleit at 14:09