This Glasgow-registered ship (ON 111292) was 'Off Sunk Lightship, River Thames' on the night of the census. 49 year-old Captain Alexander Ellis from Kincardine, Fife and his crew were engaged upon 'Foreign Trade' and this Western Steam Ship Company vessel's presence is mentioned here .
One member of that crew was 26 year-old George Mackinnon from Harris. He was the son of Mary, a Webmaker (Tweed), of 3 Leachin, perhaps a mile along the road out of West Tarbert towards Lewis. 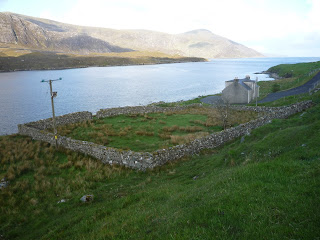 There are two later 'Oronsay' ships listed here and the fact that the earlier of these two was built in 1925 leads me to wonder if the 1900-built one had already been lost? I can find no record of the Western Steam Ship Company, either.
Posted by direcleit at 13:42