The 'Town' of Oban in Harris

In the course of researching the Sailors of Harris I was somewhat taken-aback to find one in 1881 who's address was 'Oban No 4'. I expanded my search for all occupants of this place and became even more mystified when it appeared from 1891 as a 'Town', a term usually reserved for one of the few larger settlements on the island.

Where was this town of Oban? Was it perhaps a transcription error of 'Obbe'? Clearly further investigation was demanded. I patiently went through each census, noting the number of people, and looking for clues as to this mystery location.

It dawned upon me, when I reached 1881, that this Oban was in North Harris (ruling-out the Obbe conjecture) and that it was tiny. Four houses worth of smallness.

I had already tried Googling for it but without success. There was nothing for it but to look at the maps. Carefully. Starting at Tarbert, where North & South Harris meet, I 'walked' less than a mile before four letters leapt out at me...Oban. Four letters and a lot of nothing-else-ness.

Oban is on the road to Scalpay. It lies no more than a mile from the Post Office in Tarbert. I'd walked past it last year, oblivious that it existed as a named settlement, let-alone somewhere demanding a separate set of entries in the censuses.

I next looked at the area on the 1883 map to see if, perhaps, I could see whereabouts the old houses had been. I could clearly see those of Tarbert and of nearby Urgha Beag but I've yet to find the four houses of Oban.

I turned to Streetview on Google Maps and was reminded that I had stopped to take photographs from Oban (as I now know it) because it affords a rather fine view across East Loch Tarbert to Direcleit. The small bay is Ob Liceasto. 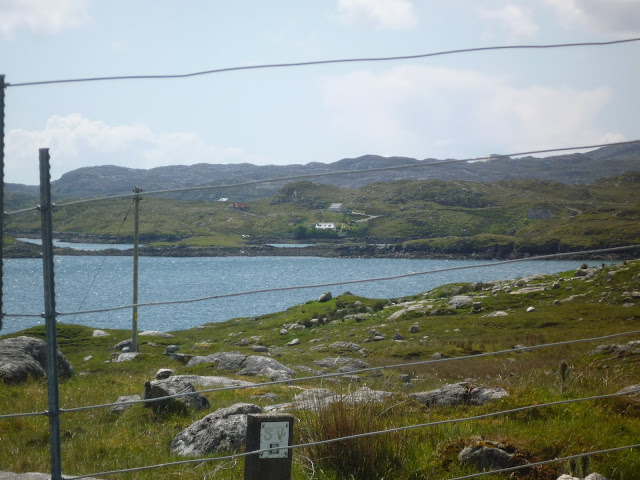 So, here are the detailed census returns for Oban, Harris from the 1861 & 1881 censuses plus the number of inhabitants for the other years. The reason for ommitting 1841 and 1851 is simple – Oban doesn't get a mention, well, not the Harris one...

After the division of Harris into North and South for the purposes of the censuses, from 1881 onwards, a further refinement began. Starting in 1891, and expanded by 1901, many places that had previously simply been an 'Address' became a 'Town'. This appears to have taken place somewhat arbitrarily and certainly not in proportion to the size of any given settlement.

It was certainly a useful development, particularly when accompanied with an increasing use of numbers to identify individual houses but nevertheless, for a wee while, the Town of Oban in Harris had me foxed!
Posted by direcleit at 01:30