This map is fascinating and what follows is merely an initial scratching of the surface to see what may be learnt from it regarding the situation in Harris at this time. 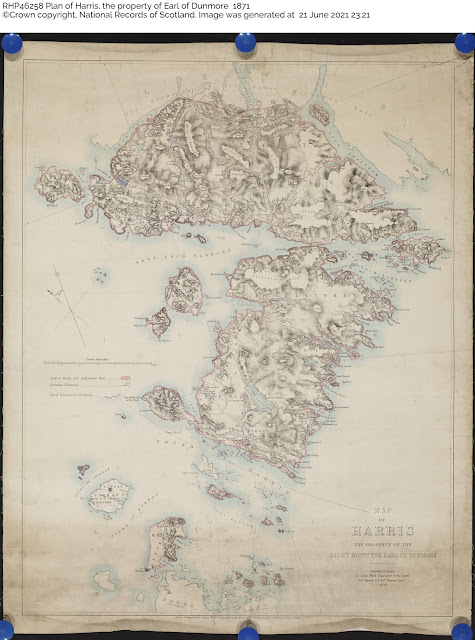 The first point is a general one for, although the map is dated 1871, the division of Harris into North and South occurred in 1867 and so the 7th Earl's property by the time of publication had been reduced to the area south of the border in Tarbert. Hence the two residencies that the Earl had built, labelled 'Ardvourlie Castle' and 'FINCASTLE' on the map, were no longer his.
In Tarbert itself, it is interesting to see what appear to be two roofed buildings at Am Faoilinn, the area on the shore of West Loch Tarbert in the fork between the road to Stornoway and Old Pier Road. I understand that one of these at this time was home to Malcolm Kerr (my 1st cousin 4x removed) who was one of five children born there between 1811 and 1831 to Alexander Kerr (1796-c1845) and his wife Ann MacLeod (1791-1863).
Further south, we see 'Luskintyre House' and a 'Scarrista House' which is near the shore abutting the Glebe of the Parish Church and Manse, each of which are on the other side of the track that leads to the substantial settlement of 'Nishishee'. The two settlements of 'North Town' and 'South Town' are shown, these two being mentioned by William MacGillivray in his book 'A Hebridean Naturalist's Journal - 1817-1818'.
Continuing past the 'Parish School', 'Embroidery School', and the 'School House' in Obbe (or 'OBEE', as it appears here!) we reach Rodel where Malcolm Kerr's cousin Angus Kerr - son of Angus Kerr (1792-1867) and Marion MacSween (1793-1874) is the Farm Grieve, or manager. Rodel House, built by Captain Alexander MacLeod, is conspicuous for being un-noted, perhaps reflecting its significance in the the eyes of the Earl, whilst we see the old church promoted to being 'St Clement Cathedral'.
Traversing the Bays of Harris we see several 'Oyster Beds' marked by shading before reaching Malcolm and Angus Kerr's late uncle John Kerr's (1789-1867) home in ' Dieraclate' where his widow Margaret lives with two of Malcolm and Angus's many cousins, her children Effie and Donald.
I have completed this swift circumnavigation of South Harris, pointing out a few things that drew my attention and including elements from the stories of the three sons of Strond, Alexander, Angus, and John Kerr at the time of the map.
The whole of Sir Edward Scott's North Harris awaits our attention but meanwhile I recommend a close perusal of this particular piece of cartography for what it may reveal regarding the history of Harris.
NB - The image is copyright National Records of Scotland and has been used in accordance with their terms and conditions as per https://www.scotlandspeople.gov.uk/content/copyright
Posted by direcleit at 14:22