The Story of Three Harris Seamen

On the shore of Ob Liceasto in East Loch Tarbert stand the tobhta, or ruined walls, of a house that was built two hundred tears ago. It was home to a tailor John Kerr from Strond and his wife Margaret Martin. They had five sons and five daughters and at least three of the brothers became sailors in the Merchant Service.

The first-born, Malcolm, was born around 1822, the sixth child, Angus, around 1838 and the youngest, Neil, in 1848. Their birth years vary in the few written records that remain (primarily censuses as Statutory Registration in Scotland did not start until 1855) so I have used the ages from their death certificates.

Malcolm, my great, great grandfather, moved to Stornoway following the death of his first wife (who had given him a son) and he married again in 1848. His second wife, Mary MacDonald, was one of the 143 people cleared from Orinsay, Pairc in 1843 and they had three daughters and two sons, the oldest of whom, Alexander John Kerr , followed his father’s calling to the sea.

Malcolm worked in the coastal trade, sailing small vessels of 30 to 60 tons throughout the waters off the West Coast of Scotland including frequent voyages to Belfast and Larne. He was active in this trade for fifty years and died of a heart attack on board Alexander John’s ship the Crest in the Horseshoe Sound, Kerrera on the 15th of December 1898 at the age of 76. His Nationality was recorded as ‘Harris’!

Angus Kerr spent several years as a fisherman according to te censuses but on the 11th of September 1872 the 34 year-old father of five died in the Royal Infirmary, Dundee. His occupation was shown as Seaman M.S. and the cause of death was Variola, or smallpox.

Neil Kerr is recorded in the 1871 census as an Able Seaman aboard the Euphemia Campbell in Moray but just seventeen months later, on the 12th of September 1872, he too died from smallpox in the Royal Infirmary Dundee. He was 24 and single.

Their widowed mother, who was in her late-sixties or early seventies, had lost two sons in two days due to this terrible pandemic that reached its peak of 71 deaths per 100,000 people in Scotland in the year that Angus and Neil died. Her husband John had died only five years earlier and together they had borne the pain of the loss of their 18 year-old daughter Catherine a dozen years before that.

The entry before Neil’s in the register is that of 22 year-old Duncan MacLeod whose address, like Neil’s, was recorded as West Tarbert, Harris. At least three men from one small part of Harris were lost that week. The population of Harris in 1871 was 4,411.

I believe Angus and Neil’s deaths were mentioned in the Dundee Courier of Friday 13th September 1872 (where Neil was incorrectly named as Robert) and, if so, then they were shipmates aboard the Dundee-registered 69 ton vessel Eureka owned by James Deas of Market Street, St Andrews. I have checked the register and am sure that the article does refer to Angus and Neil: 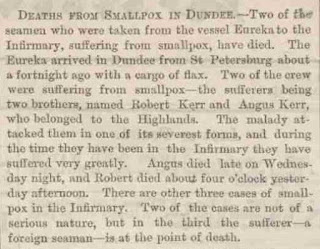 Source: the Dundee Courier & Argus, Friday 13th September 1872.
Newspaper Image © The British Library Board. All rights reserved. With thanks to The British Newspaper Archive (www.BritishNewspaperArchive.co.uk).

I have only just discovered Neil’s death, and only recently learned about Angus’s thanks to the wife of a cousin, so I have not had time to reflect upon the effect that this twin tragedy may have had on the family. I wonder how many people Harris lost to smallpox at this terrible time?

I am proud of my maritime ancestry in Harris, which has tripled in just a few weeks, and I wonder how different things might have been had all three brothers been spared, as Malcolm was, to spend half-a-century sailing these waters through middle and into old-age, encouraging the next generation to take to the sea.

Update: The vessel Eureka was in fact not the 69 ton ship of that name owned by James Deas - more details will follow in the next entry!
Posted by direcleit at 09:22